The Tiplyang Project has grown out of the efforts of a number of dedicated people, and has also had collaboration with the Gurkha Welfare Trust.

Tul Bahadur Pun VC was instrumental in the establishment of the Tiplyang project. At the time when he was born, there was no school in the area. The village was completely isolated from the rest of the world and in those days the youths had to walk six days to reach the Indian border. Pun had received his formal education only when he was recruited into the British Indian Army. It was during his time in the army that Pun came into contact with members of the families who have become key in the Tiplyang project.

When Pun was 21 years old and a Rifleman in the 3rd Battalion, 6th Gurkha Rifles, in the Indian Army during World War II, he and his section commander Captain Michael Allmand VC distinguished themselves with an incredible act of bravery, for which they were awarded the Victoria Cross. On 23 June 1944 at Mogaung, Burma, during an attack on the railway bridge, a section of one of the platoons were all killed, with the exception of Tul Bahadur Pun, Captain Allmand and one other. Captain Allmand immediately led a charge on the enemy position but was at once badly wounded, as was the third man. Rifleman Pun, with a Bren gun continued the charge alone in the face of shattering fire and reaching the position, killed three of the occupants and put five more to flight, capturing two light machine-guns and much ammunition. He then gave accurate supporting fire, enabling the rest of his platoon to reach their objective. Very sadly, Captain Allmand died from his wounds the following day.

After retiring from the army and remembering his previous problems in obtaining education, he devoted his time and resources to establishing a primary school in his village, so that the local children would receive an education.

Tul Bahadur Pun’s fund raising efforts allowed the creation of the Banduk Primary school in 1966 and in 1982 he created an additional school in the village of Tiplyang. Both schools were approved by the Government of Nepal.

By 2009, the school in Tiplyang had fallen into disrepair and it was his greatest wish that the school be rebuilt. In response to his appeal, the Tiplyang project was conceived.

When Michael Allmand’s elder sister, Marguerite, died in 2009, her daughters, Elizabeth and Anne, contacted Tul Bahadur Pun to see if they could make a contribution to assist his village, in memory of their mother and her beloved brother, Michael. When Tul Bahadur told them of his concern to rebuild the school, they decided to raise the money for the rebuilding, and Michael’s younger brother, their uncle Christopher, gave his generous support.

Elizabeth flew to Nepal to research the project. When she met Colonel Adrian Griffiths from the Ghurka Welfare Service in Pokhara, he immediately offered to rebuild the school, if she could raise the funds.

Joanna Lumley has graciously agreed to be the patron of the Tiplyang project. Besides her fame as an actress, she is also well-known for her successful campaign for Gurkha soldiers who retired before 1997 to be granted the right to settle in Britain. Tul Bahadur Pun fought alongside Major James “Jimmy” Lumley, Joanna’s father.

When Joanna heard that the Allmand family were raising money to rebuild the school in Tiplyang, she generously offered to share the cost of the rebuilding. The Allmand and Lumley families funded the building of a magnificent new school by the Gurkha Welfare Trust who worked to the very highest standards such that the building is earthquake proof in a region prone to earthquakes.

The Hands Together Tiplyang Project has as its central aim that the community help themselves out of poverty. And so it is encouraging that the community have been inspired by the project into setting up, among other things, new youth groups and mothers meetings. 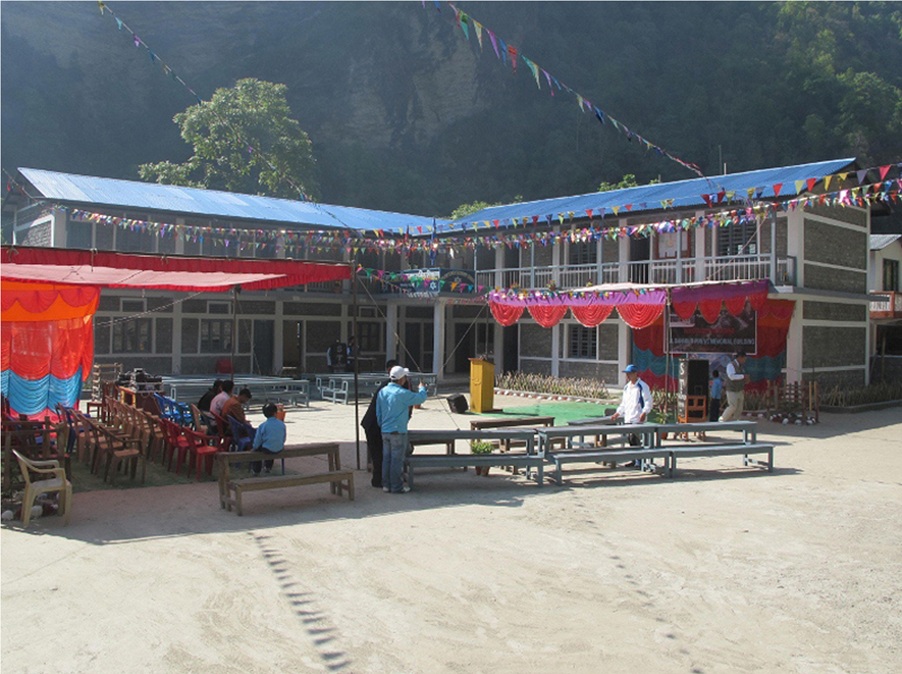